Briton Simon Yates has been withdrawn from the Giro d'Italia after testing positive for coronavirus, his Mitchelton-Scott team said on Saturday.

"The Mitchelton-Scott medical team immediately requested a rapid test, which indicated a positive result. A second, RT-PCR, test was later taken, which has confirmed the positive result." 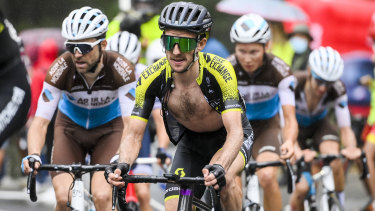 Simon Yates has withdrawn from the Giro d’Italia after testing positive to COVID-19. Credit:LaPresse

Yates, who won the Tirrno-Adriatico stage race in the lead-up to the Giro, was 21st overall, three minutes and 52 seconds behind general classification leader Joao Almeida (Deceuninck–Quick-Step), after losing more than three minutes in the first mountain stage.

Riders on the Giro stay in a bio-secure bubble when not on the road, just as they did on the Tour de France that finished on September 20. No riders tested positive for the virus that causes COVID-19 while on the French tour that Australian Richie Porte finished third overall.

On the Tour, two positive tests in a team within one week would trigger the ejection of the outfit from the race but no such rule was put in place on the Italian grand tour, which started from Sicily last Saturday. 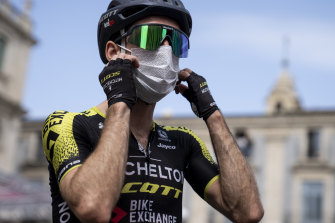 Simon Yates wears a mask at the start of stage four. Credit:LaPresse

"Simon displayed a very mild temperature on Friday evening during our routine temperature checks, which have been completed three times per day during the course of the Giro d'Italia," Beltemacchi said.

"Following the team's RACESAFE COVID-19 policy, he was isolated in his room and we immediately requested a rapid test using the services offering by the [race organiser] RCS, which has returned positive.

"Simon's health remains our main concern and thankfully his symptoms remain very mild and he is otherwise in good health."

The rest of the Mitchelton-Scott team at the Giro was also tested, have returned negative results and will continue to compete and work at the race.

"But as a precautionary measure we will monitor the situation closely and undergo further testing in the coming days," Beltemacchi said.

Italy has seen a recent rise in coronavirus cases, with a post-lockdown record 5372 people infected registered on Friday.

Trainer Paul Nicholls’ lowdown on Saturday Chepstow runners
Frankie Dettori and Aidan O'Brien win Dewhurst with St Mark's Basilica
Best News
Recent Posts
This website uses cookies to improve your user experience and to provide you with advertisements that are relevant to your interests. By continuing to browse the site you are agreeing to our use of cookies.Ok