England have confirmed Test captain Joe Root will miss the series opener against West Indies to attend the birth of his second child.

Root has been based at the Ageas Bowl with the rest of England’s 30-man training group ahead of the first Test against Windies which starts at that same venue on July 8.

However, the England and Wales Cricket Board confirmed on Tuesday that Root would leave the group on Wednesday to be with his wife, Carrie, who is expecting their second child.

Root, 29, will therefore miss England’s three-day intra-squad warm-up match which begins on Wednesday and the first Test against West Indies.

In Root’s absence, vice-captain Ben Stokes will captain his country for the first time.

Root will commence a seven-day self-isolation period at home once he and his family leave hospital and rejoin his England team-mates ahead of the second Test at Old Trafford on July 13.

The ECB have also confirmed that wicketkeeper-batsman Jos Buttler will play in the series opener despite speculation over his place in the side and act as Stokes’ vice-captain.

Earlier this week, Stokes insisted he would not alter his style of play if he was confirmed as England captain for the first Test of the summer.

‘I hope that I always try to set the example in terms of attitude and commitment,’ the 29-year-old said.

‘If I am in charge that’s not going to change the way that I go about things. In terms of how I want to influence the game, I try to have a positive effect with the ball or bat in my hand.

‘No matter what I do in terms of choosing what to do in a situation, it will always be the positive route.’ 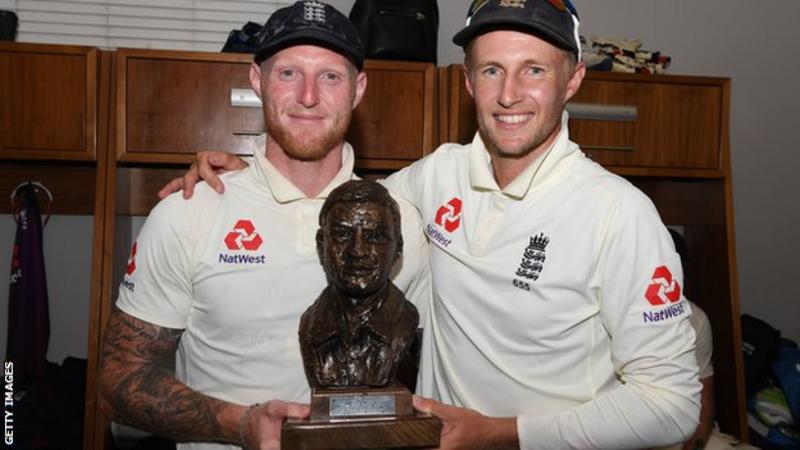 Ben Stokes says he will not alter his style of play if he is confirmed as England captain for the first Test against West Indies.

Skipper Joe Root is set to miss the match, which begins on 8 July, for the birth of his second child, with vice-captain Stokes likely to step in.

“I hope that I always try to set the example in terms of attitude and commitment,” said 29-year-old Stokes.

“If I am in charge that’s not going to change the way that I go about things.”

Stokes has enjoyed a stellar 12-month period in which he led England to victory in the World Cup final, then played one of the all-time great Test innings in the remarkable one-wicket Ashes win over Australia at Headingley.

The Durham all-rounder regularly produces his best performances in pressure moments, and did so again by bowling England to victory on the final day of the second Test against South Africa in Cape Town in January.

“In terms of how I want to influence the game, I try to have a positive effect with the ball or bat in my hand,” he said.

“No matter what I do in terms of choosing what to do in a situation, it will always be the positive route.”

Stokes was named vice-captain when Root took over as captain in 2017, but was stripped of the role following an incident outside a Bristol nightclub in September that year that led to him being charged with affray.

He asked to be reinstated at the end of 2019 and is now set to become the 81st man to lead England in a Test, and the first all-rounder since Andrew Flintoff.

“Getting the opportunity to captain England is a huge honour – even if it’s only the once you can still say ‘yeah, I’ve captained England’,” said Stokes, 29.

“It’s a huge honour to think about, and something I’m really looking forward to if the opportunity presents itself, but also at the same time I know I’m only stepping in for the one game because of Joe’s personal situation.”

Stokes, who has no captaincy experience in the professional game, and said the last time he led a side was during his time with the Durham academy.

“We’ve got some really experienced guys out in the field who I can use,” he said.

“I’d like to think that I’ll be quite an open captain and wouldn’t want to just think that my way is the only way.

“There are 11 guys out on the field, so why not get 10 other opinions on something that you’re thinking about?”

The opening day of West Indies’ four-day intra-squad practice match – their last game before the Test series – was washed out at Old Trafford.

West Indies head coach Phil Simmons is in self-isolation after leaving his team’s bio-secure location in Manchester for a short period of compassionate leave.

Cricket West Indies confirmed that Simmons has twice tested negative for the virus since returning on Friday, and will have another test on Wednesday before rejoining the squad.

The West Indies start a four-day warm-up match against England at Old Trafford on Monday, prior to the start of the first Test on 8 July.

Simmons attended the funeral of his father-in-law, who had died prior to the team’s recent assembly in Manchester, having been given permission by medical officials.

Cricket West Indies medical chief Donovan Bennett said: “Phil Simmons adhered to the process of managed exit and re-entry as discussed with and agreed on between CWI and the ECB (England and Wales Cricket Board).

“These contingencies were put in place before the tour was agreed on and all exits from the bio-secure environment must be agreed by both medical teams, before concessions are given.”

Brentford were supposed to have said goodbye to this creaking corner of west London by now.

Coronavirus has prolonged their 116-year stay at Griffin Park, so for a few more weeks at least they remain a club with two stadiums and one aim: crash the promotion party and move to swankier surroundings in more revered company.

If this represented a new beginning of the end, it wasn’t a bad start. 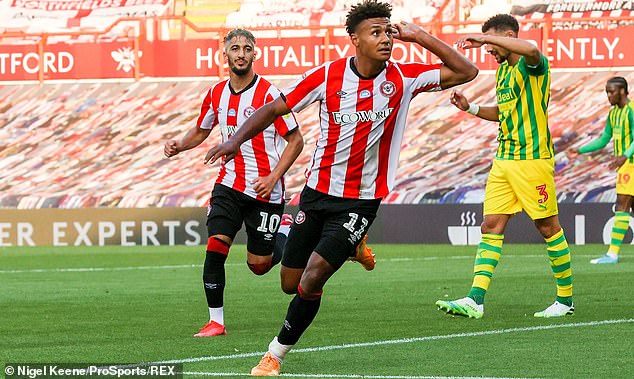 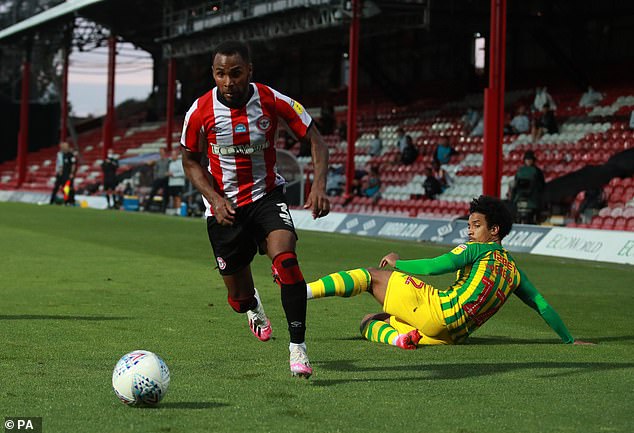 The Premier League title race may be over but the battle to join the big boys continues to cook nicely under the summer sun.

Leaders West Brom arrived here knowing victory would put them 10 points clear of the chasing pack – for a few hours at least. Now, after Ollie Watkins’ early goal decided a fractious Friday night clash, Brentford are breathing down their necks.

This long goodbye could yet end with tears of a different kind – even if supporters can’t be here for the ride.

Earlier, as the sun rose on these pivotal few days, the strangeness of this summer sprint for promotion extended beyond eerie silence and empty seats. 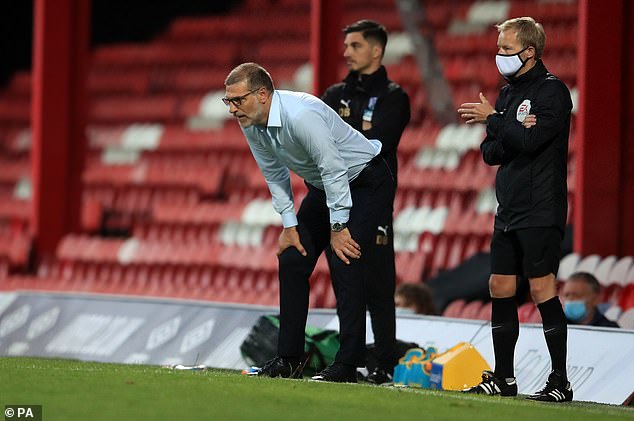 Around Griffin Park, clear skies gave way to brief torrents of rain before Mathias Jensen’s last-minute injury left Thomas Frank’s side a man down before a ball was kicked.

Soon, though, normal service had resumed. The familiar, frantic rhythm of Championship football took over and then Watkins did as Watkins has done all season.

After an opening spell in which West Brom appeared to have settled the quicker, some slick passing freed Said Benrahma down the left flank. The dangerous winger drove towards the box before squaring a pass to Josh Dasilva, whose cross-cum-shot was turned in for Watkins’ 23rd goal of the season. 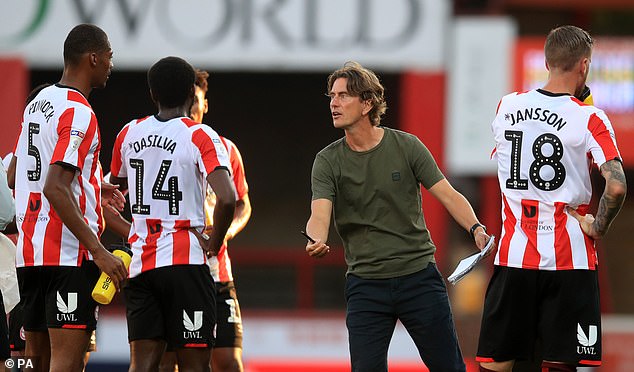 In response, the visitors tried to up the tempo but struggled to string attacks together as Slaven Bilic grew evermore tetchy. Even after a belated sniff of goal – Grady Diangana’s free-kick was saved – Brentford were still having more luck forcing the issue. And by the break, it probably should have been two.

Twice Brentford broke, twice they spurned the chance. First Benrahma’s wayward pass killed a promising move before Dasilva drove into the box, only to fluff his shot.

Bilic responded by shuffling his pack and one of two half-time replacements, Kenneth Zohore, almost sparked an immediate turn of the tide.

With his back to goal, the No 9 spun on the edge of the box and sent a thumping effort into the bar and over. David Raya in the Brentford goal was well beaten and soon the home side were teetering. 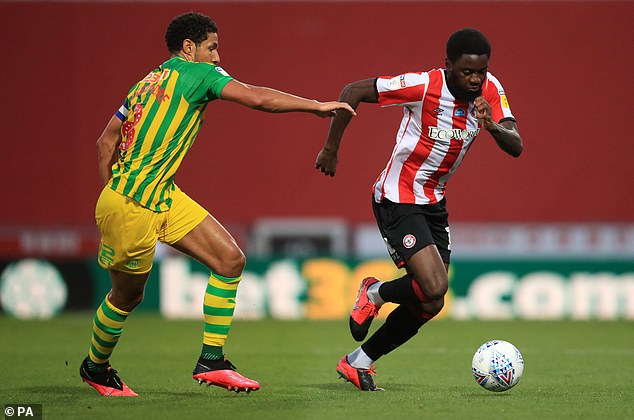 Twice their determination to play out from the back threatened disaster but nothing they tried could stem the tide of green and yellow. It is on such spells that promotion races can swing.

To their credit, Brentford gathered themselves, with Dasilva a driving force from midfield. Soon, he was inches away from doubling their lead, skewing a deflected cross just wide.

Fortunately for the few Bees left inside Griffin Park, West Brom failed to make him pay. 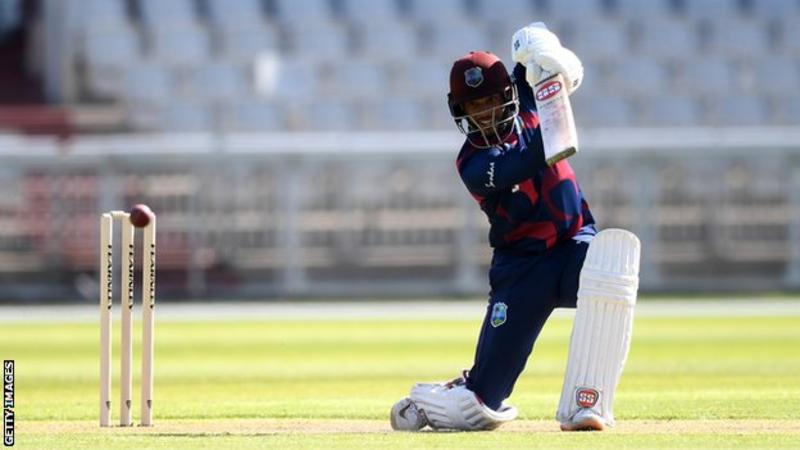 Top-level cricket was played for the first time in the world since March as West Indies began their intra-squad warm-up match at Old Trafford.

Kraigg Brathwaite, captaining his team, scored 84 and Shai Hope 83 in a total of 275 on the first day of the three-day game in Manchester.

The three-Test series against England will start on 8 July.

Originally due to be played in June, it was postponed because of the coronavirus pandemic and will now be played behind closed doors in bio-secure environments at Southampton and Old Trafford.

After this practice game, West Indies will play another internal four-day match at Old Trafford, while England will have their own three-day intra-squad match in Southampton starting on 1 July.

Gabriel is officially only on the list of reserves as he recovers from an ankle injury.

Holder, rated as the number one all-rounder in Test cricket, did not bowl because of a minor ankle injury.

There has been no international cricket since Australia beat New Zealand in a behind-closed-doors one-day international in Sydney on 13 March.