Two-time former champion and top seed Dylan Alcott has fallen in three sets to Sam Schroder of the Netherlands in the US Open men's wheelchair quad singles final.

Alcott, who teamed up with Andy Lapthorne of Great Britain to beat Schroder to the doubles crown at the weekend, had every reason to be confident after demolishing the Dutchman in the second set 6-0 having dropped the first in a tie-breaker. 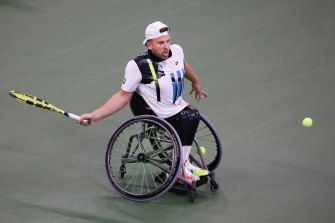 Dylan Alcott was unable to add to his doubles success at Flushing Meadows, falling in three sets to Sam Schroder in the US Open men’s wheelchair quad singles final.Credit:Getty

Alcott won his sixth consecutive Australian Open crown earlier this year and was champion at Flushing Meadows in 2015 and 2018.

Extra COVID-19 protocols rankles some at US Open

SEVEN things we learned at this year's US Open
Dominic Thiem makes history as he fights back from two sets down to win US Open
Best News
Recent Posts
This website uses cookies to improve your user experience and to provide you with advertisements that are relevant to your interests. By continuing to browse the site you are agreeing to our use of cookies.Ok