Paris: Kristina Mladenovic blamed her French Open meltdown on her US Open lockdown — and she wasn’t too pleased about a no-call on a double bounce that helped her opponent avoid ceding the first set on Wednesday, either.

France’s Mladenovic lost 7-5, 6-3 in the first round at Roland Garros to Laura Siegemund, blowing a 5-1 lead in the opening set after holding a set point that she thought she converted with a drop shot. 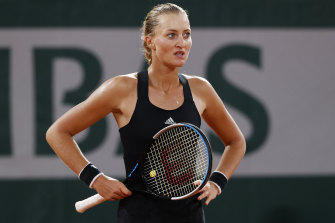 “If she would have done it, she would have all my respect and be super fair play,” Mladenovic said. “But she’s not the one responsible. I think the chair umpire is the one that should be really focused on that call.”

In her most recent tournament, at Flushing Meadows this month, Mladenovic threw away a 6-1, 5-1 lead in her second-round singles match. Then she got kicked out of doubles at the US Open — where she and Timea Babos were seeded No. 1 — because she came in contact during a practice session and card game with a countryman, Benoit Paire, who tested positive for the coronavirus in New York.

Public health officials said Mladenovic was at risk and was placed in quarantine after her singles exit but just before her doubles match.

“Definitely not the preparation I wanted to have coming up to Roland Garros. I couldn’t prepare the way I wanted, so it obviously affected my whole preparation,” Mladenovic said. “I wanted to play Rome, to play Strasbourg, but I couldn’t be ready for it.”

Not having access to a gym was bad enough, but stuck inside four walls was on another level.

“It’s brutal for the body when you [have] eight days [of] lockdown in a hotel room,” Mladenovic said Wednesday. “Even the first week, where I competed in my singles, I was basically isolated and couldn’t train.”

All in all, she said, “Not a great experience.”

Dan Evans involved in furious row after being accused of cheating

US Open women’s tennis: Punter misses out after awful choke

Heckling Roger Federer fan laughs as Novak Djokovic delivers frightening glare
No drama: Djokovic cruises in French opener
Best News
Recent Posts
This website uses cookies to improve your user experience and to provide you with advertisements that are relevant to your interests. By continuing to browse the site you are agreeing to our use of cookies.Ok