Players preparing for the Australian Open could be allowed to compete while in quarantine after arriving in the country, Tennis Australia boss Craig Tiley says.

International arrivals to Australia have to isolate for 14 days as part of strict COVID-19 protocols, but Tiley said in a letter to players that TA was working with local authorities to ensure they would be able to train and prepare for the Australian Open and other local events in the lead-up during their two-week isolation. 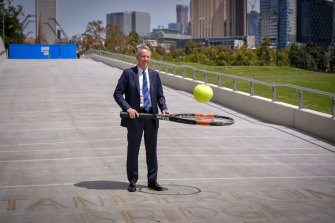 "We will continue to keep you updated on any changes, including the possibility of being able to compete during the two-week period," Tiley wrote.

Melbourne is due to host the grand slam from January 18-31, but has been in hard lockdown since early August due to a second wave of coronavirus infections.

Authorities wound back some restrictions on Monday, while the Victoria's daily rise in new infections fell to single digits for the first time in more than three months.

The low infection numbers will give organisers hope that fans will be permitted at Melbourne Park.

TA plans to set up "quarantine hubs" across the country for arriving players and give them more opportunities to compete before the Australian Open.

Lead-up events include the men's team-based ATP Cup and other warm-ups in Brisbane, Adelaide and Hobart.

TA is yet to confirm the summer schedule but Tiley urged players to arrive before December 14 to get quarantine done before week one of competition.

US Open: Novak Djokovic to meet Kyle Edmund in second round

US Open 2020 field: John Millman hits out at critics, reveals life in the bubble

Serena Williams reacts to loss to world No. 116 Rogers as Coco Gauff battles on

Tennis players fume over weather conditions and bad balls being used at Roland Garros
Rafael Nadal confident heading into most trying French Open yet
Best News
Recent Posts
This website uses cookies to improve your user experience and to provide you with advertisements that are relevant to your interests. By continuing to browse the site you are agreeing to our use of cookies.Ok