Rafael Nadal survived a scare against Jannik Sinner to reach the semi-finals of the French Open on Tuesday night, admitting he was lucky to get through the match without dropping the first set. Nadal was full of praise for his beaten foe, and was highly complimentary of his next opponent – Diego Schwartzmann.

Nadal was forced to dig deep to beat Sinner at Roland Garros on Tuesday night, with the final point coming at 1.30am local time

The Spaniard, who has now won an incredible 98 of his 100 matches at the French Open throughout his career, almost lost the first set after making a slow start.

Nadal had to battle back to take the first set to a tie-break, winning 7-4 after showing his class to force teenage Sinner into an error.

The second set was then delayed by Sinner having to take a medical break, though he showed his determination to push the Spaniard by holding his service with his first service game. 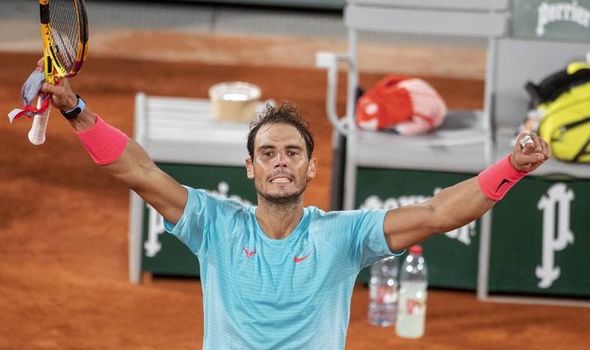 Nadal was ultimately too experienced and too good, however, breaking Sinner for the second time in the set to take the second 6-4.

In the third, Nadal appeared to be in a rush and blitzed to a 4-0 lead.

Speaking after the match, Nadal was full of praise for 19-year-old Sinner, admitting he felt he was lucky to have not lost the first-set to the Italian.

“He’s a very, very young talent with great shots. For two sets it was very tough,” Nadal said. “At the end of the first set I was very lucky. It was very difficult for me to pull him out of position.

“In the third set I improved, I was much better being much more aggressive. That’s the only way. I’m very, very happy to be back in the semi-finals of Roland-Garros again. It’s no doubt the most important place for me, the most beautiful place to play.

“Now I have two, I will say one and a half days off to rest, practise a little bit and recover to be ready for the semi-finals.”

Nadal will now face Argentine Schwartzmann in the semi-final, which will be his 13th match at that stage of the competition throughout his career. 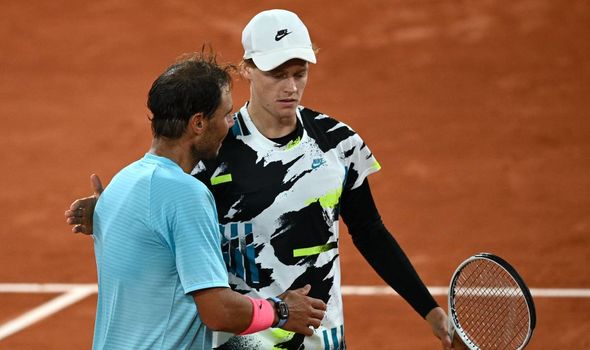 And the ‘King of Clay’ promised to take his semi-final opponent seriously, admitting the 28-year-old will have “big confidence” going into the match.

“Of course, is a challenge,” Nadal said of Schwartzmann, who knocked out Dominic Thiem on Tuesday. “When you lost to somebody, is because he’s playing well, today he played an amazing match against one of the best players of the world, without a doubt, especially on this surface.

“He’s coming with big confidence, no? Two weeks in a row… He’s in the final in Rome, he’s in the semi-finals here. He beat me there. It’s a plus of confidence for him, I know that.

“I’m going to play aggressive, try to do something a little bit different than what I did in Rome, of course.

US Open: Angelique Kerber and Petra Kvitova into third round

US Open 2020: Having ‘Serena’ on your back always makes you a target, Williams says

Tennis star’s awesome sportsmanship is all class
French Open 2020: Krawietz and Mies reach men’s doubles final
Best News
Recent Posts
This website uses cookies to improve your user experience and to provide you with advertisements that are relevant to your interests. By continuing to browse the site you are agreeing to our use of cookies.Ok