Official international tennis returns on Saturday, with the women’s Palermo Open predicting that both players and spectators will all be safe.

While British sport has quickly shut its doors again, 350 fans will be allowed in on each of the next nine days in what is the first ranking tournament to take place since the second week of March.

The restart comes as the US Open declared that it is still ‘on track’ to proceed next month, with progress being made on the thorny issue of quarantine for players both arriving in New York and then leaving for Europe. 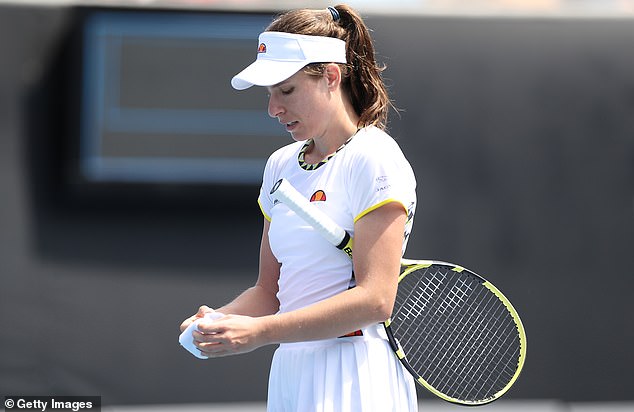 Health officials feel the Palermo Women’s Open will be safe for all involved, despite the likes of Jo Konta withdrawing from the tournament

Plenty can still change but for now players from all over Europe have converged on southern Italy and been subjected to 190 tests so far. All have come back negative, with two players shown to have already had the virus through antibodies.

In the short-term this is the start of the road that looks to be leading to Flushing Meadows, with officials brushing off the withdrawal this week of women’s number one Ash Barty.

‘I am confident that nobody will catch Covid here,’ Professor Cascio, the tournament’s consultant, told Sportsmail. ‘We have 350 people coming into a 1500-seat stadium and I don’t see that as a problem. A lot of work has been done.’

Sicily has fared contrastingly well to most parts of Italy with the virus, and Cascio said it was a matter of local pride that they were hosting the first tournament to get back underway.

‘It is an outdoor space and that is very important, the sunlight kills the virus,’ he said, issuing caution on whether large crowds can congregate for sporting events any time soon.

‘It is a seasonal virus so I expect to see a rise in cases over the winter. However, my view is that I don’t think there will be a second wave and it will be manageable – provided people keep with the measures, especially more than one metre distance and washing hands.’

A series of late withdrawals, including Jo Konta and Wimbledon champion Simona Halep, meant that the final entry list was unclear until Friday, with the qualifying event beginning on Saturday afternoon. Croatia’s Petra Martic and Donna Vekic are among eight top thirty players in an all-European field.

Fabrizio Sestini, the WTA Tour’s head of European tournaments, said that most players have so far been accepting of all the additional measures.

‘We have to make them aware that we are not going back to the old normal and there is going to have to be some patience. We aren’t forcing any players to play but we want to provide them with all the opportunities that we can to do their job.’

With scheduled American tournaments in prospect next month Andy Murray has reiterated his call for those who step out of line to be properly punished.

‘I think it would be silly to expect nobody would break the rules and the protocols. You’ve seen that in the NBA and I think it has happened in the golf,’ he said.

‘We should be preparing for that. The repercussions should be quite serious because you end up putting the whole tour and event at risk.’

Rafael Nadal pulls out of US Open due to coronavirus concerns

Murray expects more top players to withdraw from US Open
Andy Murray worried about flying to New York ahead of the US Open
Best News
Recent Posts
This website uses cookies to improve your user experience and to provide you with advertisements that are relevant to your interests. By continuing to browse the site you are agreeing to our use of cookies.Ok